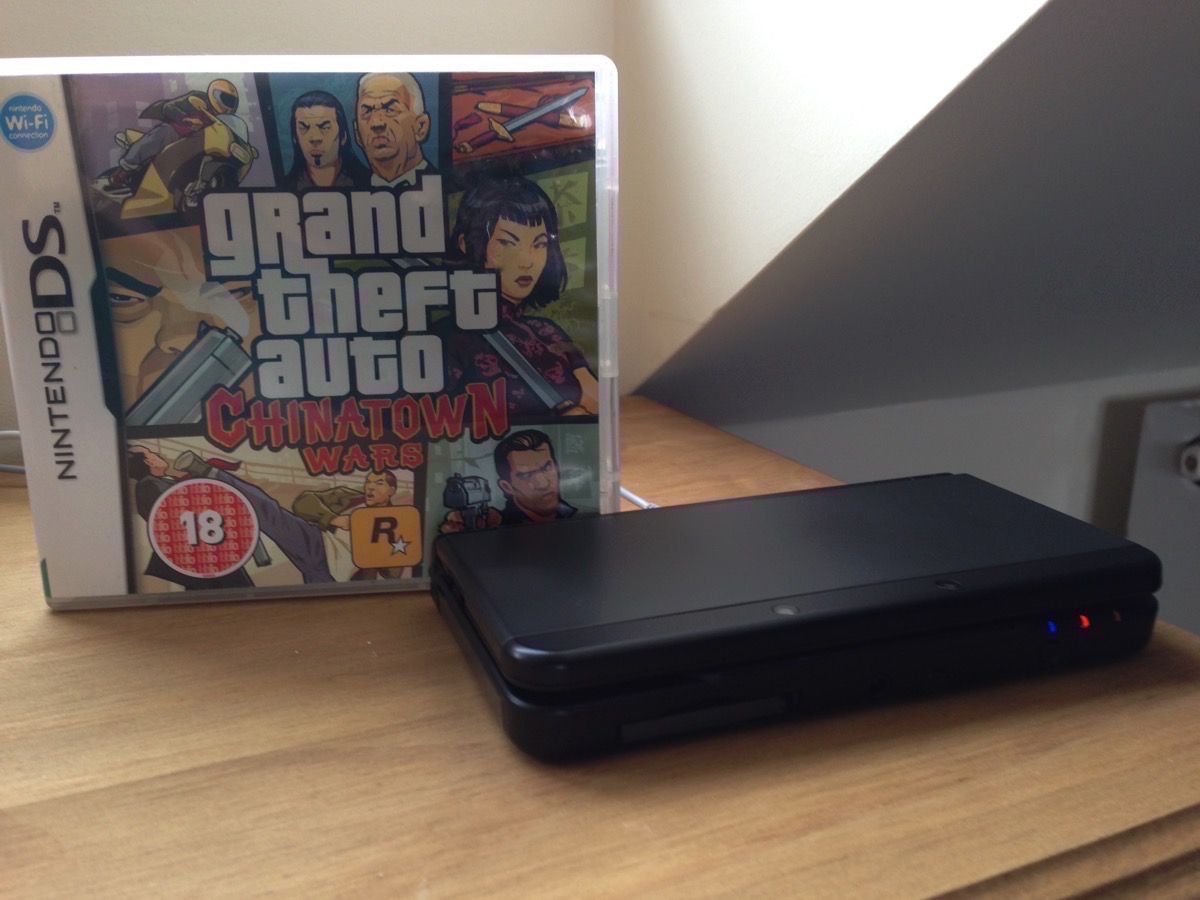 Although I completed this wonderful game on my New Nintendo 3DS, this article can be interested for iOS users as well. There’s iPad / iPhone version with better graphics, but I don’t recommend playing it without a controller.

I am big GTA fan with big open world, missions and interesting story. I completed Liberty City, Vice City, San Andreas, Vice City Stories, GTA IV. I like all of them, my only problem is sexism issues. I am not satisfied with women characters and you can’t play as a women. I am shocked that there’s 3 main characters in GTA V and all of them are men. Other games from Rockstars — Bully (one of my favourites) and Red Dead Redemption have the same problem. Spoiler: there’s one woman in Chinatown Wars, main hero immediately ask her for a date and she dies quickly in the beginning. There’s also another side mission which finishes with a death of another lady. This is unacceptable.

I remember playing Chinatown Wars on my iPhone, I bought it, started playing and never finished. I think the game is loosing its charm without dedicated hardware controls. Yes you can use it but it’s not as fun and a little bit stressful to drive around Liberty City without physical controls.

The second game I bough for my new 3DS is Chinatown Wars, this time I decided to finish it. With 3DS I managed longer gaming sessions, there was  nothing to distract me from gaming, no messages, no urge to check Twitter. But more importantly — it had hardware controls, I started to play it with a stick and than switched to the D-pad, the game is meant to be played on D-pad because Nintendo DS doesn’t have analog stick control. Thanks to Nintendo backward compatibility I could enjoy the game on the latest hardware, however, Wi-Fi din’t worked because it din’t like my Airport Extreme security settings. It looked like Nintendo fully emulates DS system, even Wi-Fi configuration panel. Anyway, I wasn’t interested in online mode.

The story is good with very specific humour. Every mission is unique and extremely fun. Usually I am trying to act as a good person in games and real world but with Chinatown Wars I gave up, it felt good to be bad. Same feeling I had only when I played Dungeon Keeper. I think all other GTA character are at least trying to find an exit from all violence, while Huang cares only about himself. There’s “trip skip” feature which allows you to skip the trip when you trying same mission third time in a row.

I think there’s one thing which makes Chinatown Wars better than all others — game economy. Playing Chinatown Wars you will never have enough money. This challenge brings new layer to the game: weapons are expensive, often you don’t have enough for your next save house. Remember other GTA games? Every following mission will give you more and more money, quickly you will have big number which you can’t even spend. In Chinatown missions pay very little and often nothing at all, moreover, sometimes you need to invest before you even can start a mission. This is not coincidence, I believe this changes were introduced because game expect you to make money with a drug trading. New economy system raises experience to a new quality level, suddenly, money start to make sense, becoming additional motivation / reward mechanism.

When playing GTA I think about it as ecosystem, as a virtual reality. What if every character in a game, even random people on the street would have their own little lives? Unfortunately this illusion brakes every time you see same car reappearing on the same spot, if you drive a truck, suddenly, the road is filled with identical models. Finally, when something unusual happens — one car tries to go faster than others or there’s rushing ambulance, poor implemented AI drives like crazy and hits everything and everyone on its way. You can spot it even on final titles when AI can’t even follow specific simple trajectory. Alan would be disappointed.

One interesting feature of the game — you can whistle into mic to get a cab. It never worked for me when I wanted and it was continuously triggered while I was in public transport. I also had go to settings and switched off auto weapon switch. You have to turn it off if you want to use a sword or chainsaw — main character Huang will switch to pistol constantly after he killing lots of people with melee weapon. I also had troubles reading silent dialogs, the font looked terrible and very pixelated, especially after using iOS.